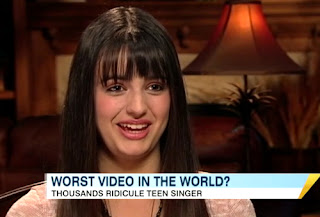 Jay Franks’ book FuturehitDNA was one of the highlights of my reading last year. This post on Rebecca Black gives you a glimpse on why he’s such an insightful student of the music biz…

WINNER: ARK MUSIC FACTORY
If Ark were a true record label, Rebecca’s parents wouldn’t have fronted the $2k for her video. Now that it’s a huge success, I guarantee they are flooded with requests from parents to make their children stars. They’ll make revenue from this for several years.


WINNER: OTHER ARK MUSIC FACTORY ARTISTS
Look beneath the surface and you’ll find a few other singers who got in before “Friday” blew up are now finding some internet success too. Check out Alana Lee, who supposedly introduced Rebecca to Ark with her 2 million views. Or the 5 other artists who each have over 350k views in one week as of this writing.


LOSER: MAJOR LABEL A&R
These guys have trouble launching one act a month. Now this upstart has effectively launched 7 artists in one week? And all of them would have been rejected by the same A&R folks. I’m not saying that’s bad (I would’ve rejected them too) but boy someone’s gotta be held accountable here.


WINNER: YOUTUBE
Their ability for anyone to upload anything produces overnight successes like this. This attracts even more people to their platform. Also, this firmly makes them a broadcaster, probably more than any previous video. 21 million views in a week? That’s more than nearly EVERY show on TV (cable or broadcast) receives in a week INCLUDING the DVR play. The fact that they have also successfully conquered with mobile apps and IPTV just increases their reach.