Releasing my first ever solo EP Let’s Build An Airport was the major milestone for me but here’s 10 other highlights of the year.

The Rise of LFC

The massive turnaround in all areas of Liverpool Football Club, but especially the performance of SAS, the blossoming of Suarez into one of the best players in the world and of course the fall of Man Utd.

Though posterboy Jake Bugg and new signings Indiana and Saint Raymond grab the headlines, they really are the tip of the iceberg. Nottingham continues to thrive and newer bands like Sea Monster Eyes, Privateers, Field Studies and Injured Birds excite me the most.

Mysterious Mostar is the partron saint of the Skyless LFC fan and the underground prophet of the match highlights videos. Thank you – whoever you are!

Addictive and profound – sign up for Maria Popova’s newsletter

I interviewed Soundhog here. His mashup and video are both things of beauty.

Along with Honest Trailers and How It Should Have Ended, BLR supplied the lols.

Sky turned MUFC’s most hated player into a universally respected pundit a few seasons ago. This year they did it again with LFC’s Jamie Carragher and created an entertaining and knowledgable double act.

After two classic albums and two dour and miserable affairs it seems like the clouds are lifting and the Monkeys have a spring in their step once more.

There’s nothing lower case about ks’s (?) epic soundscapes. His debut album also contains some great tracks (Dark Hotel for one) but The Wilderness has been stuck on my mp3 player ALL YEAR LONG. You can check out the free sampler on noisetrade.

Equal second – two self-released albums available on Bandcamp. Nottingham’s Mountain Schmountain write some of the most original songs on the planet (check out Unnatural Stances for one) and L.A.’s The Black Heartthrobs crankout super-melodic super-feelgood noisy indie rock.

Beardyman unleashes the power of several ipad, and incredible set of vocal chords and a musical genius brain. Powerful grooves, athletic melodicism and at least one hilarious trainwreck in completely improvised live set.

They didn’t call him the killer for nothing.

Brillaint tracks like Runaway, The Sky’s The Limit and The Bell rub shoulders with others that are merely very good.

It may have some average tracks but it demonstrates what it means to be an album.

The Sound Of The Life Of The Mind – Ben Folds Five

A perfecly credible return from BFF boosted by a handful of awesome tracks like Draw A Crowd, Erase Me and the title track.

*as always these are merely the albums I heard in 2013.

No not at all. We considered it valuable. I’ve always maintained that Led Zeppelin was the spaces between us. Bonzo was into soul music and Motown ballads; I was into jazz and classical music; Jimmy was into rockabilly, blues and folk; and Robert was into blues and Elvis Presley. None of us had the same record collection. Nobody on the outside of the band could understand this.

But it was very clear to me why it worked. We all loved music and liked learning about new things. Each of our individual record collections was interesting to everyone else.

And isn’t that the point? 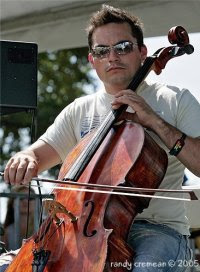 If you ever needed proof that the planet is becoming a global village here’s a song by Brenton Brown (a South African) written while he was part of a church in Cambridge UK, translated into Portuguese, performed by Brazilians, in the style of classic British rock band Led Zeppelin.

Related Posts: This is SO wrong #1
John Piper vs. Led Zeppelin

Rock music documentaries seems to be the cinematic soup du jour at the moment (ain’t I talkin’ fancy!)

First up here’s one I really enjoyed Iron Maiden: Flight 666. I was impressed by the genuine camaraderie show by the band, and the mature attitude to personal space they have, playing golf, taking their kids along on tour, sight seeing and, yes, flying 757 jets.

Here’s one not on release yet but looks fascinating, It Might Get Loud. Jimmy Page, The Edge & Jack White in an aircraft hangar, talking about guitars…

And last, one that looks funny and heartbreaking at the same time, The Story Of Anvil.
I wonder if the whole thing is a laugh at Anvil’s expense, rather like the awful singers always set up to fail in the early rounds of The Pop Factor’s Got Talent?

This song was already cool, but quoting John Piper over a drum sample from ‘When the levee breaks’? That’s too much cool.