Guitarist with The Money, The Middle Kid and er.. Jake Buckley, former pupil Jake tore up a set at the Rescue Rooms and was caught in the act. (PARENTAL WARNING – this track is VERY sweary).

Get this – streaming on Soundcloud

Get this – iTunes, Amazon and all good record shops
Then check out – Trouble Town

A soulful voice and serious piano chops way beyond her youth

Get this – download Poddingham Presents Natalie Duncan
Then check out – Devil In Me, Sky Is Falling

7) Words Of A Coward – Frazer Lowrie

Nottingham transplant Frazer paints with Mumford and Son colours on a Springsteen sized canvas. Would also make an excellent theme song to a buddy cop series called ‘Deadwood and Doyle’.

Get this – on Bandcamp

Tastebuds bring the noise with a dash of psychedelic colour

Get this – iTunes
Then check out – Gloria (Romance Is Dead)

Get this – on Amazon

The best song you will ever hear about the hook on the lower jaw of a mature male salmon – this, or any other, year.

Get this – on Bandcamp

Bear Makes Ninja – Only one third Nottingham, but a blinding Math rock band to watch out for
Everybody Knows Dave – The Austin Francis Connection – last year’s favourite notts sound still makes me smile
Nusic Podcast – “where do you find such great music?” you ask! “Click the link!”, I say.

I have to recommend an EP that I absolutely LOVE. Nottingham singer/songwriter/bassist/graphic designer Simon J. Curd‘s solo project Mountain Schmountain has a small but perfectly formed EP out called “Perfect Wreck“.

What do I love about it? Simon’s arranging palette is refreshing  – distinctly English  vocals, acoustic guitar, cello and sampled typewriter are the primary instruments. But it’s his songwriting voice that stands out as being almost completely unique. Each song is a beautifully poetic miniature (average song length is 2:30) with an almost autistic attention to detail. Other songwriters spout cliches about lovers eyes. Simon notices irises adjusting to the amount of light in a room. His world is filled “the bright strings of spit that didn’t break after people kissed”,  a “tumbler gripped and lifted to lips ready to sip” and “the buttons of your long, brown coat”. The EP closer Scribble does little more than freeze on a single moment of crossing out words on paper.

It’s a rare piece of art that makes you see the world around you in a different way. Perfect Wreck does that for me.

You can ‘name your price’ for the EP – but in a world where artist routinely get stiffed by record labels why not reward Simon’s originality with a decent price?

For a chance to win this album click here! 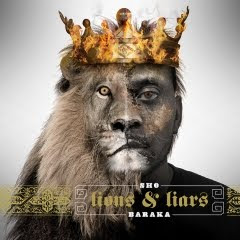 In 2009 Reach Records artist Tedashii released one of the best albums of any genre, Identity Crisis. 2010 looks like being the year of stablemate Sho Baraka and his amazing album Lions And Liars.

Like all the Reach rappers, Sho is very worded and hard hitting, but he’s humorous with it. He has a gift for handling even the most serious themes in a playful way.

The album is packed with references, both cultural & biblical & is bursting with musical styles & lyrical themes.

Ever seen a film where the best 3 minutes were all in the trailer? Well this album is the opposite. Don’t judge Oh Well & Revolutionary Died from the taster videos you‘ve seen on Youtube. Like his master, Sho saved the best for last. Both songs will have you hitting replay again and again.
The man raps with a twinkle in his eye. It’s apparent on Lions Anthem from the nod to Whole Lotta Love to rapping about the shoe salesman who’s used to save soles (souls) and his cousin at the IRS dealing with false profits (prophets).
But he’s just warming up. He catches fire on Mercy On Me. Over a powerfully penitent gospel chorus, the criminal & the cancer patient who’ll “be dead by year’s end” are our companions at the mercy seat.
I’m Black – a creatively recorded performance poem by Tom Ason, serves as an attention grabbing intro to My Life
Nice aim! They taught us to aim for nothing
And look, we hit it, dead on the button.
Sho’s personal journey through self-identity issues features superbly crafted lyrics – each line of the chorus recaps the line before, and the final line leads us back to the first line.
On Me, Myself & I he gets all Smeagol/Gollum on the mic, as he documents his battles against the flesh.
You’re a liar, a jerk you’re a creep,
So prideful, arrogant and weak.

Liar’s Anthem is built on a sample from a Don’t Waste Your Life video skit. Singing from the thug’s p.o.v. could be dangerous move, turning this into a gangster’s song, but Sho manages to makes the transition via looking at the sins of the rap industry, church & Nike(!) to straight out preaching.
Propaganda supplies the second performance poem BOYS!!! and it is a killer. In 1:29 he manages to reduce wannabe gangsters to “silly boys.” And sets the stage perfectly for the album’s high point Revolutionary Died
It’s still hip-hop minus all the thugging
Take the poet & the priest & put it in the husband
I know one song can’t change the world
But maybe the dude next door [will] stop beating his girl

This song is a classic and the only reason not to get immediately is that’s ‘cos you’re gonna get the whole album.

Oh Well keeps up the pressure over a swaggering rock groove
They save whales, save dogs, save dolphins,
Save trees – but kids ain’t really that important
All the money he wants can’t buy joy
Dollar bills don’t make men out of boys
By this stage Sho is relentless. When the beat drops he keeps going – right of the edge of the map. 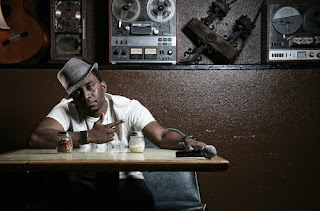 No, there’s a few weak points – all of them minor.
The early tracks struggle to sustain the weight of the grand concept. Who is the dead lion? Jesus? Christians? Does the cover mean Sho is a Liar? Or a Lion and a Liar? As well as making him look freakishly ugly it’s trying to make a metaphor mean too many things all at once. AND IT DOESN’T MATTER! The songs and the track listing are strong enough to tell their own story.
Just for once I’d love to see a hip hop album presented simply as “a collection of the best tracks I recorded this year” without feeling the need to make some kind of over hyped statement. Because the songs make a powerful enough statement all by themselves. Though strictly speaking this is not a concept album I can’t remember the last time I’ve heard an album with such a powerful flow (particularly from I’m Black to Oh Well).
The ugly photo isn’t the only sleeve issue. This is the second Reach Records release I’ve had to go online to find out the name of a track or featured rapper.
Readab1E fOnts  guys!
The album is 17 tracks plus 4 bonus tracks. Filling every second of the CD runs the risk diluting the album. There’s nothing wrong with the bonus tracks – (Kobe Bryant On Em extended mix? Yes, please!) but why not keep the album tighter and include a unique download code for bonus tracks?
So to sum up, the only things wrong with this CD are Sho paid more attention to the music than the artwork and is too generous with his tracks. Shame on you Sho!
This is an incredible, inspiring five star album. It will make you laugh and make you think. It will move your heart and probably the rest of your body with it .

Wanna get your hands on a free copy of this CD? Tune in tomorrow to find out how.

( Read the first part of the review here)

Another trait shared with U2 is MuteMath’s ability to have a full and compelling sound even though no one instrument seems to be playing all that much. The ‘catchy as a cold’ first single, Spotlight showcases how they really do operate as a band rather than simply overdubbing a bunch of instruments on top of each other. Speaking of overdubs, what would a normal band use to build into the first big chorus – power chords? String pads? On Goodbye and Odds MM use violin and marimba/glockenspiels!

Meany’s world-weary lyrics about “our sad terminal democracy” on the latter seem to refer to how the band scrapped all the songs they’d already written on the road for this album and started again from scratch. 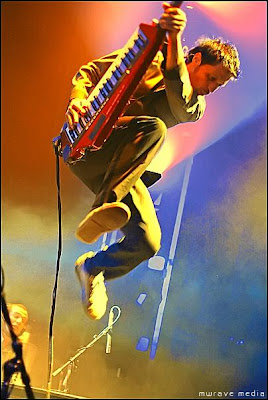 Standout ballad Lost Year could almost be a Swell Season piano track but for the odd chord clusters in chorus. No instrument ever seems to be played conventionally or predictably for very long. Darren King’s drumming, often chopped up, distorted and compressed, is transformed on Pins & Needles into a gentle Jazz-like support for more string quartet oddness.

Closing track Burden opens like a driving INXS song but in the final few minutes becomes a plaintive and almost ambient meditation on the futility and fragility of the fallen condition. Built musically on the bridge of Spotlight, it’s a masterful Ecclesiastes like summation of the album’s theme.

This album is a grower, full of surprise and depth on every level.
You can buy Armistice here

Related Posts: Solving the energy crisis…
BestCds of 2008 (with beef and cheese) 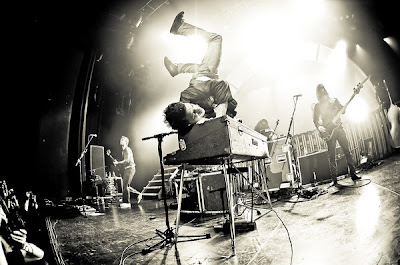 What U2 are to the modern worship movement Mutemath could be to postmodern indie rock worship. Channelling it, perfectly expressing it, transcending it, and ultimately defining it. The band that every other band sounds a little bit like. The most influential band in the genre without actually being in the genre. Maybe.

I’m not saying they particularly SOUND like U2. Mutemath don’t really sound like any one of their closest ‘competitors’. For one thing there’s a organic feel that earths even their most programmed moments, giving them a humanity that David Crower Band’s relentless barrage of bleeps (AKA ‘Church Music’) never gets close to.

For another the funky atmosphere of the band’s native New Orleans is a missing ingredient in most bands but simmers away in the background here like a spicy pan of gumbo. The spirits of George Porter Jr. & Zigaboo Modeliste hover around title track Armistice like funky guardian angels. (In fact the only disappointment with the album is that the barebones remix of Armistice showcasing the Rebirth Brass Band isn’t here – but you can listen to it here or on Under The Radar’s podcast). 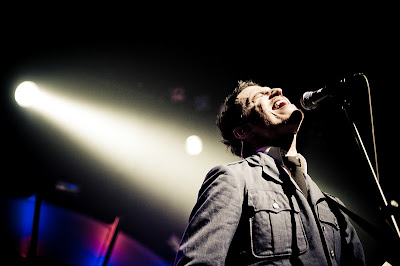 but where U2 want to save the world MM just want to “set it on fire.”

Backfire kicks off with a beguiling constantly detuning guitar. Guitarist Greg Hill may be from the Edge school of minimalism but he paints his own pictures with his own colours.

Presumably taking it’s name from the uber-distorted bass intro Clipping is overlaid with skittering drums and classical piano arpeggios. In place of a guitar solo we get a string quartet swooping and screeching and capturing the song’s desperation and confusion perfectly.

Thanks to Vitamin Z TV, AM Music Blog, and Max Roper (photos).