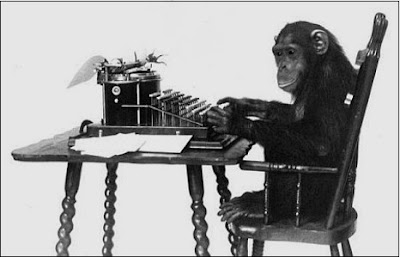 It’s not everyday a bunch of monkeys gives support to one of you ‘pet’ teaching theories but here it is.

Anytime you’re trying to learn something new musically you’re only truly practicing when you’re doing it correctly. If you’re getting it wrong 50, 40 or 30% of the time you are NOT practicing.(Other than practicing how to do it wrong, and chances are you already excel at that).

Prof Earl Miller from MIT, who has already spent more time than is healthy teaching monkeys how to use computers, found that monkey’s neurons became more efficient when they made the right decisions but showed no change when they got it wrong. In short (neurologically speaking) you don’t learn by your mistakes.

So what should you do next time you pick up your guitar, or piano (my, you are strong!) and try to get the nice scientist to give you a banana?

Playing everything at top speed is one of the biggest errors that people make. And many musicians start at the beginning of a song, play till they make a mistake and then start again. Let’s break down what is happening in this scenario.

If you don’t want your practice sessions to be an exercise in futility, isolate the one element that is causing your musical train wreck and just practice that.

It might be a physical thing – you just can’t get your fingers in the right place. So forget about the song, the groove, the tempo. Just get the chord.

It could be a mental thing. The reason you keep messing up is you don’t really know what you’re supposed to be playing in the 14th bar. Learn it.

It could be stamina. Forget the song. Put on Season 2 of My Name Is Earl

and play that riff till your arms go numb.

But remember you’re only practicing if you’re getting it right all the time. Listen to the monkeys.