Once a week (or once a day if I’m being obsessive) I’ll check my referrals via Sitemeter, so I can see where my traffic is coming from. A good percentage come from google searches. Here’s a recent one

“when i’m kissin you i fantasize you’re a midget”

Embarrassingly my blog was the ONLY result.

Fairly Unrelated Posts: Never gonna give your teen spirit up
The Eglon Song
This takes rickrolling to a whole new level!

It’s a Rick Astley/Nirvana mash up by Germany’s DJ Morgoth with a Video by Thriftshop XL.

You can download the mp3 from Morgoth’s blog. (And while you’re there check out Ace Of Spades Feels Good – Motorhead/Gorillaz on the player). 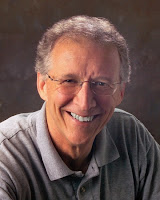 John Piper recently gave a great lecture on ‘The Pastor as Scholar’, which you can download from DesiringGod.org.

It’s one of the most biographical things I’ve heard from him & gives considerable insight into his life and motivation.
(Don Carson’s ‘The Scholar as Pastor’ is also worth a listen).
Related Posts: Don’t waste your tweet
A conversation with Death 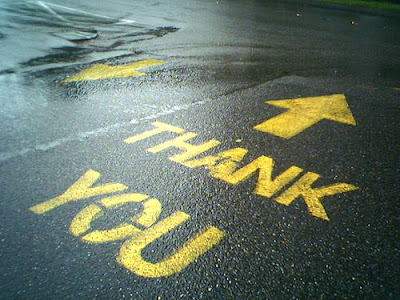 Al Metcalfe has a timely reminder about two powerful little words every leader should use after a meeting.
One of the groups of people on his helpful checklist is…
“people who brought significant contributions such as prophetic words, scriptures or prayers. They helped lead the worship just as much as you did and had to be obedient to the Spirit to step out and bring things publicly. Acknowledge that and thank them”.
He concludes…

“Thanking people is the simplest of all disciplines but over time has a transforming effect on everyone concerned”.
read the whole thing.
Related Posts: Multicultural worship downloads
John Bunyan on being in the worship team 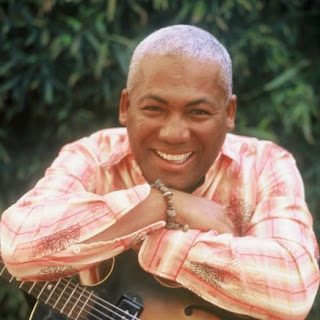 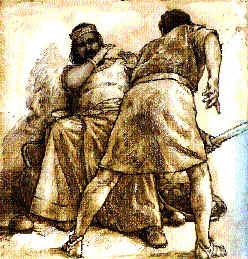 I was reading the ESV translation of the Bible in the garden one day when I came to Judges 3 and laughed at the explicitness of their translation of King Eglon’s demise at the hands of Ehud the judge. When my children asked me why I was laughing at the Bible I told them the story. Wide-eyed they asked me if that “was really in the Bible!” After all, isn’t it rude to talk about poo? Evidently the Bible writers were not so squeamish! As we talked about it, I started singing the refrain to a “here we go around the mulberry bush” type tune and improvising verses.

And that would have been the end of it, had they not pestered me at regular intervals to “finish that song,” even asking me if they could sing it at church! So I kept working on it and gave it a new tune set to a chord progression influenced by an old jazz standard. The ‘universal playground chant’ makes an appearance in lines like “King’s flabby belly” and the little intro chords (E6 & Eb6) were inspired by Ry Cooder’s playing on ‘Jazz’ and ‘Pecos Bill’

“back in the day when the Bible was thin”

on the drive to a romantic getaway with my wife. It remains one of my favourite lines from any song I’ve written.

I had a momentary pang of conscience that a good children’s song should have a moral, a life lesson to impart. But the feeling quickly passed and was replaced by the joyous affirmation –

“if you’re wondering what this song is really all about…”.

That being said I did refer to commentaries while writing this song just as I would with any song. My one regret is that I didn’t managed to include a reference that, like me, Ehud was left-handed.

The song is dedicated to J.I.Packer – ESV Bible General Editor and jazz music fan, and, of course, my children.

Related Posts: Rise
Behind the song: Son Of God/GodThe Son

Soooo sorry to those who’ve been trying to download the mp3 of the infamous Eglon Song. The link is now fixed.
– don’t forget to leave a comment! 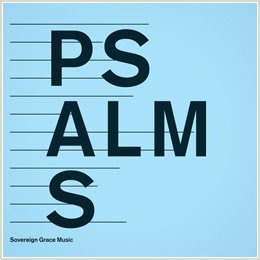 God Is Our Refuge is a passionate, driving worship song based on Psalm 46 written for the Sovereign Grace Psalms CD.

You can find links to download mp3’s and chord sheets here.

What was the initial inspiration? 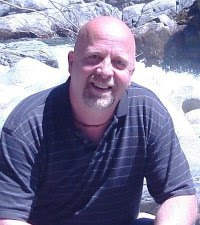 PETER: I was reading through the Book of Psalms (more like scanning actually) in preparation for writing songs [for the album]. I was looking for Psalms that had some familiar language to them, but that were not overly familiar, and that could translate well to life in our modern world.

God is our refuge and strength,
a very present help in trouble.

– is a strong opening statement that sets up the rest of the Psalm, I found myself coming back to it time and again so I thought that should be the chorus for the song. However, in seeking to connect the Psalm with the modern world I was thinking a lot about wars, famines, floods, tsunamis, and earthquakes – the stuff our news headlines are full of. As a result, I wrote the 2nd verse first and then the chorus.

How did you come to write a song with someone you’d never met?

PETER: [When] I was about 95% satisfied I posted the lyrics [on the Sovereign Grace songwriters forum] with the hopes one of our other writers would write the melody for it. Joel picked up on it and wrote the melody in one night. 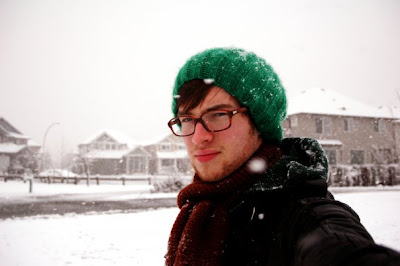 JOEL: I was working on another song for the Psalms album [You Will Never Change] but was stuck and couldn’t think of a line that I needed for it so I went on the forum, found some of Peter’s lyrics, and decided to see if I could come up with any melodic ideas for them.

PETER: He originally hammered out a demo on acoustic guitar, then I got together with some of the musicians in our church and we worked up an arrangement that sounded a bit more like Coldplay than the final CD version does.

How long did the song take to finish, and how much rewriting did you have to do?

PETER: The song took about a month to the (almost) final draft.

JOEL: When I write melodies I typically just pick a chord progression and sing what feels like a natural fit for the lyrics and then do a basic recording with just a vocal and acoustic guitar or piano. I usually end up writing 3 or 4 completely different melodies for a song and try to pick the best one but on God Is Our Refuge my first idea ended up being the one that was used.

PETER: I’m a strong believer in the writer’s mantra – “rewrite, rewrite, rewrite”, so after determining what the song content should be, and hashing out some preliminary ideas and rhyme schemes, I spend most of my time rewriting. Not being a particularly talented musician helps me focus on lyrics.

In pre-production Bob Kauflin, Joel, and I emailed back and forth for 2 or 3 days. Bob made a suggestion about switching the verses so they followed the Psalm more closely [and] we agreed that the song needed a bridge. I also revised verse 2.

PETER: I think it’s important to study and take time to digest the subject matter I’m writing about so as to have some perspective and a few solid ideas when I start to write. As I studied this Psalm, I was also meditating on related passages in Psalm 2, Daniel chapters 10-12, and Revelation 22. Distilling and including ideas from those passages while highlighting the language of the Psalm was a bit challenging, but not unduly so.

Joel Virgo has a challenging article in the latest Newfrontiers magazine, entitled “Where are the men?”
He takes various elements of Church life (prayer, preaching, parenting, giving, humility to name a few) and looks at how we can slip into handling them in an effeminate way.
Here, he looks at corporate worship…

Do men ever come into a Sunday worship service and reflect ‘this is a masculine environment’? I reckon it’s possible, but you have to work at it. Some of our songs lend themselves to a masculine response – songs full of objective truth that help men know what they’re singing about. Songs that subjectively express our love or longing for Jesus are entirely Biblical. Just beware of unbalance.
A normal masculine man is going to be troubled in his first visit to church (even if he got saved at Alpha) if he has to stand for 40 minutes and sing words he would find awkward writing in a card to his girlfriend. You know the songs I mean.
Maybe your worship leaders (if they are guys) should be the sort who remind you of Johnny Cash rather than Art Garfunkel.

Read the whole article.
Related Posts: The one with the Redman video
Terry Virgo on spirit-led worship

The King is on the toilet…
Singlong Assasination Song For Kids Vol. 2
Downloads    mp3 acoustic demo     Chords (pdf)     Lyrics (pdf)     Behind The Song

Back in the day when the Bible was thin
Israel was conquered by a heavyweight King
So they prayed for a saviour who was able to fight
Big-bellied Eglon the Moabite.

Well, Ehud was the man God chose
He made a little sword & hid it in his clothes
Said “King I got a message to whisper to you”
Then in went the sword & out came the poo because he…

Ehud’s sword stuck in his guts
But the kings’ flabby belly just covered it up
He shut the doors & then he ran back home
Before anyone saw what he’d done.

The servants said “phew, what’s that stink?
The king is on the toilet that’s what I think.”
But when they opened up the door
There lay Eglon dead on the floor because he…

Stabbed him in the belly & his poo came out….

Ehud blew the trumpet & he said “it’s war!”
And the Moabites ran as people grabbed their swords
And as they fought they all sang this song,
“Do you want to know what Ehud did to King Eglon?
I’ll tell you, he…”

Stabbed him in the belly & his poo came out…

Well the flabby baddie didn’t get a chance to shout
‘Cos he stabbed him in the belly & his poo came out
And if you’re wondering what this song is really all about…
It’s squishy, squashy, (give you hands a washy!)
Squishy, squashy poo.

What do you mean you’d prefer some more ‘normal’ songs? Oh, OK…

Great High Priest
Song Of The Redeemed
The Weight Of Glory