Skip to the content
Son of God/God the Son takes it’s inspiration from John ch.1 and is my attempt to sum up the wonder and the mystery of the incarnation.

The music is minor key yet worshipful, acoustic yet aggressive. 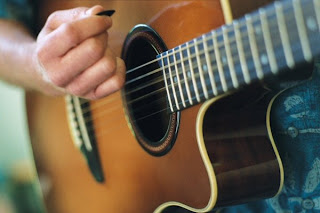 Son of God, God the Son,
Eternal Uncreated One
You became what you were not
When you became a man.

Purest light, no stain of sin,
Glory cloaked in human skin
Flesh & bone your offering,
You lived & died a man.

Emmanuel you dwell with us,
A diamond in the human dust,
To save the fallen ones you loved
You became a man.

Gave up your rights, not once but twice –
An outlaw’s death, a servant’s life
Now raised in honour, glorified,
You reign as God and Man.

Links to this song: Forty Eight -Hot off the press – Almost

Related Posts: Song Of The Redeemed
Behind the Song – More Than I Could Say

Here’s Yuri Lane an incredible beat-boxer/performance artist. Check it out… 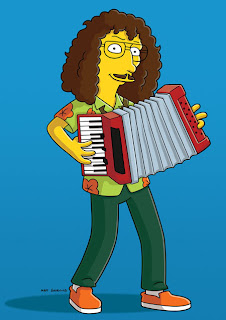 In previous posts I’ve started to build a case for why I think Weird Al Yankovic is one of the greatest lyricists of the present day, pointing out the way he fashions a completely new song while sticking closely to the original rhyme scheme and meter. This is a very restrictive way to work. But that’s not all. In some songs he does all of the above despite the lyrics being a complete summary of a film storyline.

Here’s a few examples from his parody of American Pie – The Saga Begins (aka Star Wars: The Phantom Menace)

A long, long time ago…
I can still remember
How that music used to make me smile.

A long, long time ago
In a galaxy far away
Naboo was under an attack

So bye-bye, Miss American Pie.
Drove my Chevy to the levee, But the levee was dry.
And them good old boys were drinkin’ whiskey and rye
Singin’, “this’ll be the day that I die.”

Oh my, my, this here Anakin guy
May be Vader someday later – now he’s just a small fry
And he left his home and kissed his mommy goodbye
Sayin’ “Soon I’m gonna be a Jedi.”

And the three men I admire most:
The father, son, and the holy ghost,
They caught the last train for the coast
The day the music died.

And the Jedi I admire most
Met up with Darth Maul and now he’s toast
Well, I’m still here and he’s a ghost
I guess I’ll train this boy

Sing us a song, you’re the piano man
Sing us a song tonight
Well, were all in the mood for a melody
And you’ve got us feelin’ alright

Sling us a web, you’re the Spider-Man
Sling us a web tonight
‘Cause we’re all in the mood for a hero now
And there’s evil doers to fight

Now Paul is a real estate novelist
Who never had time for a wife
And hes talkin’ with Davy, who’s still in the navy
And probably will be for life

As well as the numerous echos (It’s a pretty good crowd for a Saturday/It’s a pretty sad day at the funeral and Now John at the bar/ Now Harry the rich kid) he goes beyond merely relaying the plot, adding wry commentary on the film itself…

And he’s ridin’ around on that glider thing
And he’s throwin’ that weird pumpkin bomb
Yes, he’s wearin’ that dumb Power Rangers mask
But he’s scarier without it on.

The Saga Begins is on Running With Scissors and Ultimate Collection DVD AND Weird Al Live DVD. Ode To A Superhero is on Poodle Hat.

When I first started reading my first few John Piper books (I’m up to around 25 now) I was completely blown away by his ability to get so much out of one verse. So much so, that I asked the leader of the theological course I was doing if this Piper guy was really ‘kosher’ – I couldn’t believe that there was so much that I was missing.

Well I’ve decide to track with with the people at Bethlehem Baptist Church, Minnesota as he preaches through John’s gospel for the next 30 years or so (slight exaggeration). In a sermon on John the Baptist John makes a massive point just out of the word ‘not’. I kid you…not.

The reason I’ve not been blogging this week is that aside from the normal teaching I’ve been doing a school’s production of ‘We Will Rock You’. So a good 20 hours of my life this week has been spent in these luxurious surroundings… 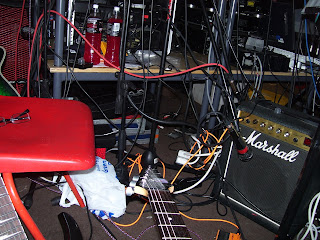 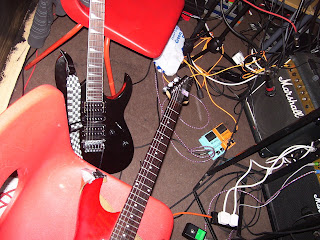 …there’s a reason why it’s called ‘The Pit’! 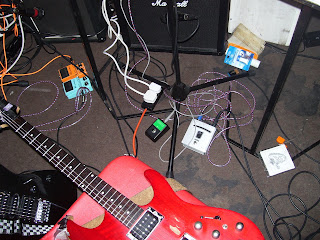 We seem to angling for an Ibanez endorsement… 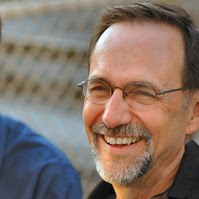 Stephen & Mark Altrogge over at TheBlazingCenter.com are giving away the mp3 of Mark’s song ‘As Long As you Are Glorified from the CD “Come Weary Saints” (you can also get a free second song here!)

Here’s a free song to download from The Fold – New Skeptic from the album, “Secrets Keep You Sick” (Tooth & Nail Records) courtesy of TheFreeChristianMusicBlog.com.

It’s a nice tune from a band that falls into the category of ‘band of Christians’ rather than ‘Christian band’. I was all geared up for a genre debate (and we can still have one in the comments if you want) Hard Rock? Pop-Punk? Emo? New-Emo (Nemo?!#+) but then I just watched the video and the singer is wearing a black shirt and a red tie. Yup – He’s got that Emo-Overalls thing going on. Tre Chic! 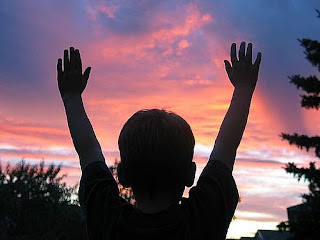 More Than I Could Say (2008) Worship Song
You have called me your friend, when I was happy to be your servant.
Aminor key worship song with a big chorus. My most popular song at my home church.

You have called me your friend
When I was happy to be your servant forever,
Set a crown on my head
When all I wanted to be was loosed from my chains.
You have made me your child
When all I wanted to do was follow your Son.
You poured out your love
When it was enough that you held back your anger.


You have called me a saint
When I just wanted to change things I was ashamed of.
Made me shine like a star
When all I wanted to do was flee from the dark.
Gave me good news to preach
When I was glad just to be one who believed,
You gave me a song
When it was enough that you ended my weeping.


I love you because you first loved me,
Called & chosen before the stars came to be
Predestined in love to love you freely.


How great is the love that you lavish on us,
That we should be called the children of God
And that is what we are! 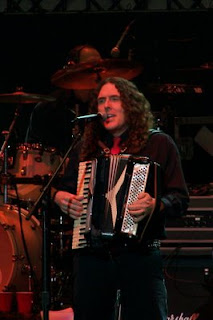 In my first post I made the outrageous claim that not only is Weird Al Yankovic one of the greatest lyricists of his generation, but that all ‘serious’ songwriters would do well to emulate his example of diligent rewriting.

Time to bring forth some evidence.

Exhibit One. One of my all time favourite Al lyrics from Jerry Springer, a parody of Barenaked Ladies song One Week.

Once you start watchin’, there’s just no stoppin’
Your brain shuts down, then your IQ’s droppin’
Jerry’s the king of confrontation, He’s a sensation
He puts the ‘sin’ in syndication.
It’s totally worthless, like a bad cheque, it’s like a train wreck
Don’t wanna stare but you can’t look away
Like Sally Jesse he does talk shows, but with more weirdos
The ratings jumpin’ higher everyday

As a song in it’s own right the lyrics are brilliant, from the flow of ideas (bad cheques to train wrecks) and the play on words (‘sin in syndication’) to the flawless rhyming (confrontation/sensation/syndication). But when you consider this has been done within the constricting form of a parody of an existing song the skill involved is breathtaking. Here are the original lyrics…

Chickity China the chinese chicken
You have a drumstick and your brain stops tickin’
Watchin’ X-Files with no lights on, we’re dans la maison
I hope the Smoking Man’s in this one.
Like Harrison Ford I’m getting frantic, like Sting I’m tantric
Like Snickers, guaranteed to satisfy
Like Kurasawa I make mad films. (O)kay, I don’t make films
But if I did they’d have a Samurai

Yankovic mirrors this exactly and even improves on it in the 7th line where he rhymes ‘talk shows’ with ‘weirdos’ where the BNL’s repeat the word ‘films’.

exactly the same in 6 lines and never more than 1 syllable difference!

Both of these elements ensure a strong resonance with the original song. But as if this wasn’t enough, Al often manages to incorporate original phrases into the new lyrics. “your brain stops tickin” is reworked as “Your brain shuts down” and “Like Kurosawa” is replaced by “Like Sally Jesse”.

There’s a lot more where that came from, but for now go buy the song on Al’s Live DVD or the classic CD ‘Running with Scissors’ 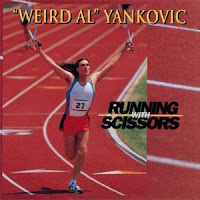 In my humble opinion, one of the greatest lyricists of today is “Weird Al” Yankovic. 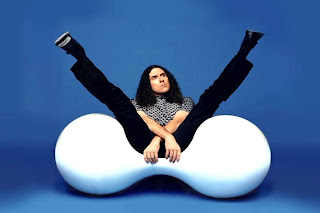 As well as being an accomplished singer, accordionist (still being serious!), composer, arranger, video editor & director in his own right, what makes him stand out is the incredible level of artistry he brings to his parodies. His commitment to rewriting would put most songwriters to shame, even the ones who deal with weighty political ideas or are writing for ‘God’s glory’ rather than just entertainment (thought there is nothing wrong with entertainment).

It contained hundreds of pages of lyrics, notes, and various working drafts of the songs on his latest album, Straight Outta Lynwood. In the final version of “White & Nerdy,” Yankovic sings that he’s

“Got people beggin’ for my top eight spaces / I know pi to a thousand places.”

All told, there are more than 200 unused lines for “White & Nerdy.” By the time he was finished, he’d reclaimed Chamillionaire’s original so thoroughly, listeners didn’t even need to know “Ridin'” to appreciate “Nerdy.”

Weird Al reminds me that great songs are not written, but rewritten and in honour of this master songwriter I’ve decide to do a short series of posts highlighting his work.

In the meantime – do you have a favourite Al moment?